The rise and fall (and rise) of Air Miles. What Employee Recognition schemes can learn from the original customer loyalty program. 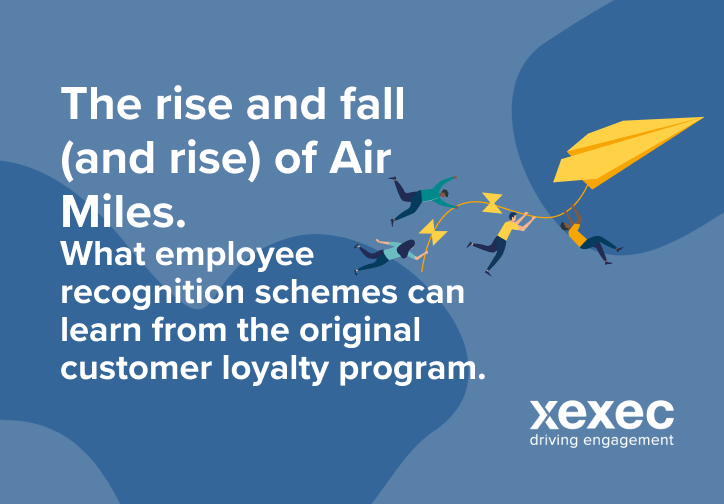 How many loyalty cards do you own? If you conform to the average you have 14.3. You might even have a separate wallet/purse to keep them in.

The fact that most of us belong to multiple schemes raises this tricky question:

If we have 14.3 loyalty cards, are we really being loyal to those brands?

A cartoon by Marketoonist says it beautifully. It shows a shopper at the till rummaging in her bag and exclaiming: "Wait. I may have a card showing my loyalty to whatever store this is."

The truth is that the loyalty scheme is a decades old idea. In its original form, the concept is a little stale. Today's customers expect more from a loyalty program than just discounts.

Industry experts know this. In a recent report on the topic, Deloitte concluded: "The word ‘loyalty’ is often associated with the points and financial incentive schemes that were launched over 30 years ago.

"While participation rates in loyalty schemes are relatively high, the reward offered is not seen as differentiating for the brand. It is expected rather than valued.

"These schemes are no longer enough to satisfy more demanding customers, whose loyalty has evolved. Customers require a more personal and relevant approach. Loyalty should be about more than just collecting points."

Needless to say, this analysis applies not just to customer reward schemes but employee reward and recognition programs too. Anyone in the business of workplace incentives should remember that rewards can be about so much more than material gain. They can enhance status, reflect an ethical goal, stimulate a sense of shared purpose and so on.

The aim should be to make employees feel great about their workplace and their colleagues.

Happily, there is plenty of best (and worst) practice in the consumer space the we can learn from.

The airline industry is a good place to start.

When it introduced Air Miles in the 1980s, the concept was immediately successful. Customers loved it. Airlines did too. Air Miles stimulated demand and built brand loyalty. And yet the cost was filling seats that would have gone empty anyway.

However, this was unsustainable. Over time more people started to fly. Flights filled up, and suddenly passengers travelling for 'free' were taking the place of those who might have paid.

So what did the airlines do? They made Air Miles harder to redeem. They introduced additional fees, tightened stopover rules, and restricted what could be spent on partner programs.

This was understandable. It was also dangerous. Passengers resented the restrictions. Suddenly, programs created to make customers more loyal started to alienate them instead.

In 2016, this growing discontent came to a head. Canadian citizen David Helm launched a class action suit against Air Miles Canada. He was furious because Air Miles' parent company LoyaltyOne had tweaked its program so that points would expire if unclaimed within five years. He alleged the change stopped him from going on a dream holiday.

In December of that year, LoyaltyOne responded to the growing pressure and tricky PR. It apologised and abandoned the expiry policy.

Extraordinary, really. Here was a scheme designed to make customers loyal. But it had gone so badly wrong, it made at least one go legal.

Incidents like this forced airlines to reconsider their schemes. Over time, they started to think more about rewarding frequent fliers with better experiences rather than just points.

Companies such as American Airlines tweaked their schemes to offer benefits from free checked luggage to lounge access and upgrade vouchers. AA has also changed the fundamentals of its scheme. It now awards points based on money spent with the airline rather than purely in miles booked.

The industry also learned to re-think its attitude to unspent points. According to a Mckinsey report, there are more than 30 trillion frequent flier miles currently sitting in accounts. This surplus is known as 'breakage' and it suits the airlines well. After all, every unclaimed journey is a seat they can sell.

But the Mckinsey says this attitude is also changing. "More advanced carriers are shifting their views," it says. "Expired miles represent a lost opportunity to engage customers. Carriers are starting to lengthen their expiration policies, to remove expirations totally for higher-value customers, and to introduce micro-redemption ranges to encourage more frequent activity."

So, what can you – the employer – learn from all this? Clearly, you should apply the same creative thinking to workplace rewards schemes.

Many companies already are. They are changing the nature of rewards so that, alongside cash and physical products, there is also the option of travel, events and experiences. They are adopting technology solutions from companies like Xexec to help them do this.

Here at Xexec we have many ideas about how you can apply what the airlines have learned about customer rewards to workplace recognition.

We advise that you re-think the management of schemes too. Recognition shouldn’t be all top-down. Instead, let peers recognise each other’s contribution and make it possible for staff themselves to decide what the right rewards should be. You should also make sure the reward scheme has a public platform, so that everyone in the organisation is made aware of an individual's (or team's) contribution.

To learn more about how to engage employees through recognition download our free guide below.

Back to Blog
Topics: Employee Engagement,,,,,